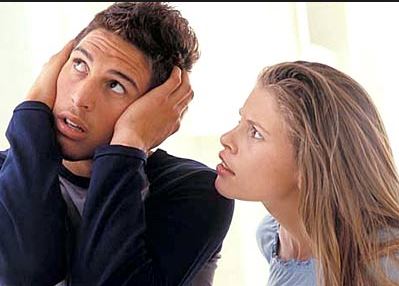 Whatever Sarah has said to you, listen to her voice. — God to Abraham, Genesis 21:12

The picture above illustrates a mindset that men have carried with them for centuries. A mindset that was created and instilled by some of the greatest religious leaders of ancient times. This mindset has subjugated women and placed a badge of inferiority on them that God never intended for them to have.

Concerning women, there is a fundamental, if seldom commented upon, conflict between biblical law and biblical narrative. The Bible’s laws favor men (e.g., only they can initiate divorce and, in most instances, only they can inherit), but its narratives portray women as operating on a level of relative domestic equality. — Rabbi Joseph Telushkin, Jewish Wisdom

For centuries, women have been treated as property by men. They were forced into a position of inferiority by “religious” leaders throughout history even though it went against scripture. In the above verse, Abraham is told by God to follow his wife’s wishes, although they went against his own. A little later, in Genesis, 27, it shows us that Rebecca had far better insight than Isaac into the character of their two sons, Jacob and Esau.

In Exodus, the first two chapters show one heroic and noble woman after another. First, two midwives, Shifra and Puah, are the only ones in Egypt who resist Pharoah’s order to murder all the male Hebrew babies. Later, Moses’ mother, not father plays the key role in hiding him when he is born. His sister, Miriam, not his brother, Aaron, watches over him when he is put into the Nile. Lastly, Pharaoh’s compassionate daughter saves Moses from drowning, raises him in her father’s house, and thus sets the stage for the Jews’ liberation from Egypt. Decades later, in on of the most cryptic passages in the Torah, Moses’ wife Tziporah saves his life (Exodus 4:24-26). (Telushkin)

In the Book of Samuel, Hannah, serves as a Talmudic model for how all Jews are to pray. Hannah’s prayers are answered, and the child born to her is none other than Samuel the prophet.

Centuries later, when Haman plots genocide against the Jews, it is Queen Esther that saves them.

God raised up Deborah as judge and general of the Israeli Army. During her leadership they had peace for 40 years. During the battle of Jericho, it is a woman that God uses to save the Israelite spies, and again, God raised up a woman to kill Sisera for his crimes against women.

Despite these examples, the thrust of many religious leaders’ teachings regarding women are demeaning and abusive. God never told men that women were inferior. God never told men that women were to be subjugated. God, by example, used women to do great things just as he did men. God did not have a problem raising women to places of honor and leadership; men had a problem with it.  When God says he is no respecter of persons, he means it. This includes gender. The number one sect of people throughout history that have subjugated and abused women —  who have changed scripture and laws to enslave them —  has been religious leaders in every sect of human society. The scriptures do not support their twisted theologies and laws created as a result. Women were created equal. Because of ego, sex and control, it all became twisted and women have suffered as a result. It’s time to break the cycle of brainwashing that has taken place against women and give them the honor, respect and dignity they have been denied. It’s also time to give them the protection they need from abusive and evil men.

Donate to Together We Heal

Religion’s Cell Partnered with Together We Heal

Together We Heal is a non-profit organization dedicated to helping victims of abuse. All tax-deductible donations through this link go directly to this organization. If you would like to help us to be able to help victims, please consider donating. Thank you!

Godly Response to Abuse in a Christian Environment

The Mission of G.R.A.C.E. is to empower the Christian community through education and training to recognize and respond to the sin of child abuse. Your donation enables G.R.A.C.E. to help victims of sexual assault in the religious setting to receive the professional help they need. Please consider supporting this organization through your tax-deductible donations. To donate, click on the PayPal link above.